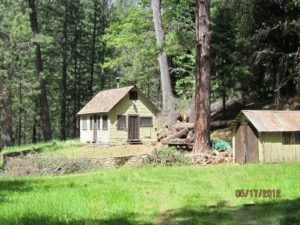 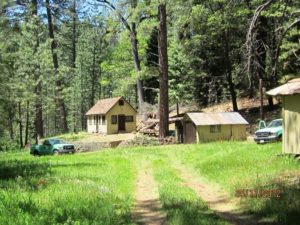 Placer Guard Station is situated overlooking a meadow along the banks of Chiquito Creek. This U.S. Forest Service complex is a long-lived manifestation of government occupation for the purposes of fire control and recreational development that dates in this area to the early 1900s.

Located in the Minarets Ranger District [ed. now Bass Lake District] of the Sierra National Forest, Placer Guard Station possesses local significance as a representative example of USFS vernacular architecture, and also possesses local significance in the category of conservation as an early guard station used in the daily administration, operation, and protection of the national forest. A brief overview of the history of the Sierra National Forest and the role of the ranger is in order, so that we might understand Placer Guard Station’s place on the forest.

Created by presidential proclamation on February 14, 1893, the Sierra Timber Reserve consisted of an area of more than four million acres set aside to be managed for the long term use and care of the region’s timber, water, grasslands, and mineral resources.1 It was not until passage of the Forest Reserve Act of 1897 and subsequent monetary appropriations beginning in 1898 that the federal government provided for the administration and protection of the forest reserves.2

Conservation of the nation’s natural resources meant tighter controls over grazing allotments, timber sales, and the control and suppression of destructive forest fires. The work in the field was carried out by “forest rangers,” skilled in rugged pioneer living as a result of growing up on the farms and in the mountains of the midwest and west. A keen sense of justice, the ability to operate independently, a rugged constitution, and a proven ability with horses and hand tools were the job requirements for an early day forest officer.

Because the first generation of rangers were local men experienced in mountain skills, knowledgeable of the country, and usually employed for the balmy months of the summer and fall, there were no provisions made for anything more than temporary quarters. Using their own horses and carrying food and bedroll with them, the first forest rangers did just what their name implied: they ‘ranged’, or roamed over vast tracts of public land, checking grazing permits, fighting fires, cruising timber, and stringing telephone lines for cross-country communications systems in the remote mountain regions.

One of the earliest indications of a ranger occupying the area known as Placer Meadow on Chiquito Creak appears in the October 1, 1912 issue of The Sierra Ranger. It was reported at that time that the meadow had been fenced with barbless wire, presumably for the purpose of holding the forest officer’s stock. The Ranger also mentions that fire guard E.T. Allen had been stationed at Placer all summer without being required to suppress one fire.3

It was that necessity for readiness and the likelihood of nothing happening for long periods that allowed forest rangers and fire guards the freedom to exercise their considerable talents in the field while waiting for an emergency, such as a fire, to arise. It was probably just such a summer that inspired the resident fire guard (possibly E.T. Allen or his successor) to build a rustic structure of vertical plank siding and shake roof, on the same location as where the present cabin now stands. While the date of construction of that first residence in unknown, longtime Oakhurst resident and former Placer fire guard Jesse Love speculates that it have been built sometime around World War I.4 That building was in use when Love and his wife arrived at Placer Guard Station in the summer of 1936 to assume the duties of fire guard, trading places with another USFS employee who took Love’s position at Castle Peak Look Out.5 Accompanied by District Ranger Ed Madsen, the Loves were not impressed with their new quarters, which were described as ramshackle and dirty. Madsen gave them permission to make any improvements on the building that they desired, and so they proceeded to fix up their rustic residence as best they could.

Shortly thereafter, the Loves acquired a supply of lumber salvaged from an abandoned Civilian Conservation Corps camp located at Logan Meadow. With the assistance of CCC foreman and carpenter Al Rayder and three CCC enrollees, fire guard Love razed the old cabin and built the new residence on the same site. Working together, the five men completed the new house in one week.6  While the new cabin was being built, Love and his wife lived in a tent in the meadow. After their house was completed Love developed a spring located to the north of the cabin. He constructed and installed a wooden tank and copper pipeline from materials that were once used by bootleggers who operated a still near Friant, and that was confiscated by federal agents when the illegal activity was discovered.7  The Loves used a propane stove for cooking, gas lanterns for light, and a wood burning stove for warmth and to heat water.8 During his spare time, Love also built the rock wall that surrounds the residence. He hauled sand and river cobbles in his personal pick up truck from Soda Springs campground on West Chiquito Creek. One year Love was kept from working at Placer Guard Station because of an injury, and so his replacement for that season, Cliff Manley, continued to work on the section of rock wall from the south facing steps toward the storage shed.9

Love was on call as a fire guard throughout the season, but when he wasn’t on a fire he was required to spend eight hours every day performing some kind of work. Love not only built the residence, storage buildings, and rock retaining wall during his ten seasons at Placer Guard Station, he was also responsible for the maintenance of six campgrounds in the area. They included Mammoth Pool, Sweetwater, Placer, Chiquito, Camino Creek, and Beasore. He dug pits for the latrines and for garbage and performed general maintenance and clean up of the camping areas. Fire guards were few and the distances great during Love’s tenure, for there were only two other fire guards in his area: one stationed at Bass Lake and the other at Clover Meadow. A fourth was added at Logan Meadow in 1942 for additional protection during the war.10

2 Samuel Trask Dana, Forest and Range Policy. Its Development in the United States (McGraw Hill Book Company, 1956), p. 110. The Department of the Interior oversaw the administration of the reserves until February, 1905, when that function was transferred to the Department of Agriculture. The name “Forest Reserves” was changed to “National Forests” by an act of Congress, March 4, 1907.

CURRENT CONDITION:  A 2011 condition survey by the SNF found health and safety issues at Placer Station.  In 2012, the SNF received funding to improve the condition of Placer Station.  Hazard trees were removed, and excess fuels (brush, logs) around the station were cut, piled and burned to provide for fire protection.  Since this time, there are more hazard trees that pose a threat to the buildings.  They will need to be felled.

The cabin needs the foundation (post and pier) re-done and the flooring is bowing.  A new subfloor and floor will likely need to be installed.  Windows need re-glazing and panes may need replacing, if broken.  There is a wasp infestation (paper wasp nest and honeycomb nests visible on the exterior and in the attic) that needs to be addressed.  Exterior needs some shingles replaced and entire building repainted with appropriate paint color (existing paint is not historic color scheme).  Last I was there, the roof was in good shape.  It had been repaired around 2009 or 2010.  Both doors need repair work and lock hardware replaced.  We have extra period locks and could see if they would work.

Overall, in good condition, but is damaged where an old walnut tree fell and took out a portion of the wall and steps leading up to main cabin.  Most cobbles are likely there, but need to be chipped of old mortar and re-mortared.

Fuels reduction includes weed eating each year to keep the grasses down.  The picnic table is in bad shape and may just need to be replaced.  Likely, some more fuels reduction would need to occur due to recent tree mortality.